hello, Brantley fans! today, August 9, was a special day for our boy because Michael Brantley got his first walk-off hit of the 2018 season in the game versus the Minnesota Twins!👏👏👏 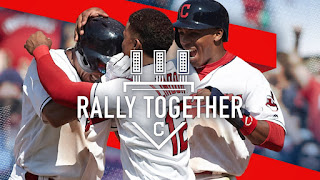 here's how it went down. the Indians held a 4-1 lead until
the Twins mounted a comeback in the top of the 6th inning against Corey Kluber. Bobby Wilson began the inning with a leadoff line drive single to left field. after Logan Forsythe lined out to right, Eddie Rosario hit a fly ball that bounced off right fielder Melky Cabrera's glove for a single. then Jorge Polanco hit a three-run home run to right-center field that tied the game at 4.

the Indians' bats remained quiet until the bottom of the 9th inning. nine-hole hitter Greg Allen led it off against right-handed reliever Addison Reed and sent a sharp ground ball single to right field. during Francisco Lindor's at bat, Allen stole 2nd base. Lindor grounded out to 1st for the first out of the inning, but moved Allen over to 3rd base.

so Michael came to the plate with Allen at 3rd and 1 out. Reed threw Michael two straight balls before getting a called strike, which i'm gonna argue was outside and not actually a strike. no matter though because Michael swung at Reed's next offering and sent a ground ball just under the glove of 1st baseman Miguel Sano, into the hole and into right field for a walk-off RBI single! and the Indians won the game, 5-4!

the hit marked Michael's first walk-off of the year and his second straight game with a go-ahead RBI! this was also the second walk-off win in as many days for the Tribe, their first back-to-back walk-offs since August 18 and 19 in 2016, per Joe Noga's article on cleveland.com.

for whatever reason, this Minnesota team in particular has given Michael a lot of trouble this year, as he's only 14-for-60 (.233) against them in 15 games (with another three to go later this month). not only that, but Michael has also recently been struggling to hit with runners in scoring position and was a mere 1-for-20 with RISP in his last 21 plate appearances coming into this at bat. so this was certainly a big hit in more ways than one!

after Allen scored the winning run, Michael knew what was coming, and he seemed like he didn't want any part of the mob scene. Lindor ran to him near 1st base and they high fived before he real beating began. Jason Kipnis dumped a red Gatorade bottle on his head, Edwin Encarnacion smacked off his helmet and tore off his jersey, Carlos Carrasco got him with the baby powder, Cabrera threw a cup of water on him, Trevor Bauer had two cups of water for him, Erik Gonzalez had the circular drink tray full of cups, and Yan Gomes simply wet Michael more with water bottles.🌊 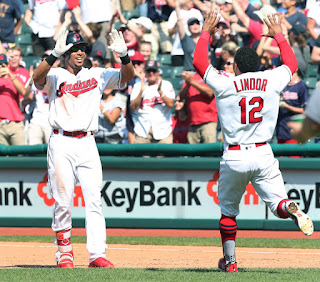 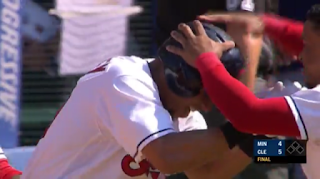 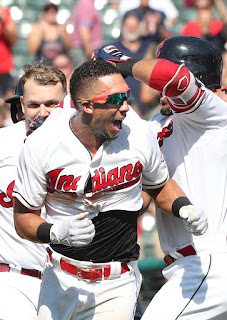 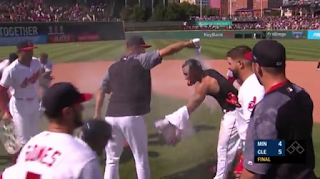 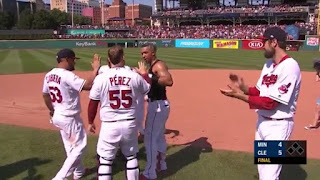 after getting doused with Gatorade, his on-field interview with in-game SportsTime Ohio reporter Andre Knott began. Knott first inquired what was going through Michael's mind at that moment. "i just gotta get the job done for my team. uh, Greg Allen did a great job leading off the inning, getting on base, stealing 2nd. Francisco Lindor put me in that opportunity by getting the guy over and, that's a team effort all the way around to win that, win that game right there."

does he change anything that he's doing, knowing that the game is on the line and they may pitch to him differently? "no, i gotta just stay aggressive, stay under control, try not to do too much."

"i'll take the celebration as long as we're winning," Michael went on in Jordan Bastian's mlb.com/indians article. "it's tough. you get some Gatorade, get some powder, you name it, it's coming at you. it's a win, everybody gets to celebrate. we get to have a happy flight.

"[Allen] does a phenomenal job. he's a great kid with a great head on his shoulders. he understands that when he comes up here, we expect him to do his best, and he is doing it day in and day out."

Michael praised Allen further in Bastian's Covering the Bases blog on bastian.mlblogs.com. "phenomenal job. obviously, he led off the inning with a single, and that's a big base to steal right there in that time. Addison Reed slide-steps to the plate. so, he did a great job of getting to second and then Frankie did a good job of getting him over and putting me in that situation. that's a team run right there all the way around and thanks to those two guys, i got put in that opportunity."

in his postgame presser, manager Terry Francona lauded the All Star left fielder in Noga's article on cleveland.com. "you're always kind of on edge, but boy it's nice to have him up in that situation. you know the at-bat's not going to get ahead of him or be too big. he's gonna swing at a strike. and rarely does he pull off. all the things you're looking for in a situation like that."

congratulations on your latest walk-off, Michael!👏💗😀

i can't let this go by without also mentioning how this was a much better August 9 for Michael than last year was. if you recall, he Michael was placed on the 10-Day DL with a right ankle sprain for the second time on August 9, 2017, an ailment that kept him out of game action 52 days!😬 but it's been so far, so good for Michael in the health department this season!🤞


keep following me on twitter @clevelandgirl23 for live tweets of all Michael's plate appearances and the latest news, stats, and facts. and check out my #CelebratingMichaelBrantley series if you haven't yet. i've been spolighting big moments from Michael's career with the Indians every Monday, along with some special anniversary dates. everything is all in one thread, so you can search the hashtag, check out what i've posted so far, and leave your own comments and memories, too!🎉

don't forget, i also have a subscription list. to join, just enter your email address in the box underneath the Blog Archive sidebar over on the upper right side of this page. then you'll receive notifications sent directly to your inbox every time i publish a new blog!📧
Posted by 216clevelandgirl at 7:17 PM