in a marathon 16-inning game versus the New York Yankees tonight, Michael Brantley came through in the clutch and was the Tribe's hero of the midnight hour.

earlier [yesterday] evening on August 11, the first meeting of the season between the Indians and Yankees began at 7:10 pm. it was a battle that lasted until approximately 12:14 am when none other than Michael delivered the winning run for his first walk-off hit of the year and 4th walk-off overall in his career!

the game went to the 10th inning and Bryan Shaw came on in relief of Cody Allen. the Yankees loaded the bases after Shaw gave up a walk, single, and single. pinch hitter Chase Headley came into the game and
hit a 2-run single into right field, giving New York their first lead of the game. most Tribe fans probably assumed the game was over at that point, but that was not the case.

in the bottom of the 10th, Francisco Lindor led off with a single and Michael followed with a double that moved Lindor to 3rd base. Carlos Santana was up next and he hit a sac fly to center field, making the score 4-3 Yankees. Yan Gomes then hit a 1-out RBI single to right-center field on which Michael scored the tying run. the game remained deadlocked at 4 for the next 5 innings.

on to the bottom of the 16th inning. with Jose Ramirez at 2nd base and Lindor at 1st base, Michael came to bat against right-hander Branden Pinder with 1 out. after a 1-0 count, Michael ripped a liner off the glove of 1st baseman Mark Teixeira and into right field for a base hit.


Indians 3rd base coach Mike Sarbaugh waved Ramirez around. the throw from right fielder Chris Young was wide, and Ramirez scored the run that gave the Tribe a 5-4 walk-off win!


after Michael's game winning hit, he knew he was going to get mobbed, so he ran out into center field to try and avoid the pounding lol but the guys caught up to him. Lindor got to him first and jumped on his back.


then everyone else ran out there and Michael got water thrown all over him from cups, water bottles, and even some kind of super soaker type water gun (courtesy of Corey Kluber). and from what i saw on the YES broadcast (because i was able to watch this game on TV for a change since we played a New York team), it looked like one of the guys (Cody Allen?) even grabbed him in the nuts lmao but as this was all going on, i just thought, omg please be careful. his back is just starting to feel better and i didn't want anyone hurting him and messing up his back again lol but it was great. 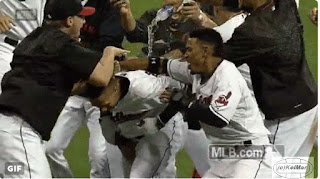 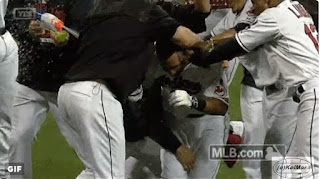 coming into this game, Michael was batting .360 (36-for-100) with runners in scoring position, which according to Tom Hamilton was the 2nd best in baseball. so when he got his turn to bat in the 16th with 2 men on, you had to figure his odds of getting a hit were pretty good. i'm so happy for him. congrats, Michael!


this was Michael's 4th walk-off of his career, his 3rd walk-off hit, and the 2nd walk-off win for the Indians this year. he hit 2 walk-off home runs in 2014 and drew a walk-off walk in 2011. so he's no stranger to delivering big hits.

Michael did several postgame interviews. the first i got to hear was the one he did with Hammy and Jim Rosenhaus on WTAM 1100. Hammy asked him what he was thinking when he came to the plate in that situation with runners on 1st and 2nd in the bottom of the 16th inning. Michael replied, "to try not to do too much. just try to get a good pitch and put the barrel on the baseball."


then in his on the field interview with Andre Knott for Fox Sports Ohio, Michael alertly avoided the Gatorade shower that Jason Kipnis and Gomes tried to bathe him with lol after that, he told Dre that as a team "we're getting some good breaks, we're swinging the bats well. hitting's contagious. we've got a good, positive attitude coming to the ballpark each and every day with all the young guys. it's just fun coming to the ballpark and learning."

lastly, in Michael's media interview in the locker room, Zack Meisel mentioned how he ran away from the mob after his hit. "absolutely. i mean, you do something good, you get beat up for it. i don't understand how that works but uh, i was trying to spread it out so they all didn't attack me at once."

this game also marked Michael's 3rd straight 3-hit game, and his 6th straight multi-hit start. in what is shaping up to be a incredible month of August for Michael, i can't wait to see what else he does, not only in these last few weeks of August, but also the rest of this season.
Posted by 216clevelandgirl at 3:19 AM