if you haven't heard the news yet, Michael was officially shut down for the rest of the season today after receiving a cortisone shot for his right shoulder inflammation. and because his 2015 season has now ended and all his current numbers are final, that means Michael has set one last record this year. he finished with a career low 51 strikeouts. his previous career low was 56 strikeouts, his season total in both 2012 and 2014.

now, some may argue this shouldn't technically be considered a new career record because Michael only played in 137 total games. that's less than most players who play a full season play. but despite missing more games than usual due to several injuries he battled this year, Michael is still a qualifying player and therefore i am calling this an official career low. congratulations!

Michael's last strikeout of the season came in the game versus the Minnesota Twins on September 28. the Indians were down, 3-1, in the bottom of the 1st inning when Michael came to the plate with 1 out to face left-hander Tommy Milone. after a 1-2 count, Michael swung and missed to give him his 51st strikeout. 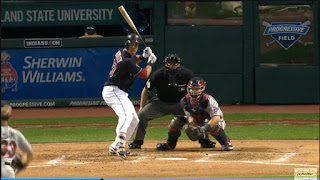 Continue reading this blog post here »
Posted by 216clevelandgirl at 6:10 PM No comments:

this is certainly not how i expected Michael Brantley's season to end, although it is sadly fitting that he's going out much like the way he began the year--with an injury. today, on September 30, it was announced that Michael's season is done, as the Cleveland Indians are shutting him down because of his sore right shoulder.

it all started in the game against the Minnesota Twins on September 22. Aaron Hicks was at the plate facing Danny Salazar in the bottom of the 3rd inning with 2 outs and Eduardo Escobar at 1st base. after a 3-1 count, Hicks sent a line drive to deep center field. Michael ran over a long way to try and make the diving catch, but when he hit the grass, the ball popped out of his glove and rolled onto the warning track. the Twins took a 1-0 lead, and the Indians were about to lose Michael.

Michael came to bat against Ervin Santana in the top of the 4th inning and grounded out to short on an 0-1 count. then when the Indians took their places in the field in the bottom half of the inning, Michael had been subbed out defensively because during his at bat, he felt something in his right shoulder on his extension. that was literally the beginning of the end for Michael's season, though we didn't know it at the time.

he missed the next 4 games from September 23-26 before

Continue reading this blog post here »
Posted by 216clevelandgirl at 4:52 PM No comments:

Michael just got done putting together a colossal month in August and that moved him right into the thick of things regarding team highs, league rankings, and even the American League batting race. it was incredible and i am so proud of him! he now has up to 32 games to play in before 2015 comes to an end, and if Michael can do anything close to what he did in August in these final weeks, then strap in tight folks because we are gonna be in for a really fun ride to the finish line. go Brantley!


Michael's .322 batting average is currently the highest on the team out of all the qualifying players. he now has a 3-point lead on Jason Kipnis, who's batting .319.


note: never before in Michael's career has he been

Continue reading this blog post here »
Posted by 216clevelandgirl at 6:29 PM No comments:

hey there, Brantley fans! thank you for reading my Brantley's July 2015 #s blog and Brantley's 2015 #s Through July blog last month. i hope you enjoyed them. i also want to take a minute to say a special HI! to the viewers from Hungary, Singapore, Russia, and the United Kingdom who all visited my blog in the past month! thanks so much for stopping by and reading about Michael!

the offseason is fast approaching now. it's hard to believe after this, i only have one more month of stats to calculate before the 2015 season is over. things are really starting to heat up not only for Michael, but the Indians as well. can they continue to rack up wins and potentially grab a wild card spot? and what will Michael do for an encore in September? i can't wait to find out! but first, let's all relish in what turned out to be an astounding August for Dr. Smooth.

there was seemingly no stopping Michael in August--the man was scorching hot! it was quite reminiscent of his MVP-caliber performances every month last season, when he was setting career highs and achieving things he'd never achieved before on the regular. he certainly didn't look like a player fighting through injuries, going through the dog days of summer, and/or battling just to make it to the end of the year. instead, he currently looks primed and ready for a stretch run. and now i am so excited to get into his monthly statistics, some of which are historical! =D

in Michael's first 10 games, he bat .425 (17-for-40) from August 1-13. he was then shut down for a few days with a little left shoulder inflammation. when he came back from that brief 3-day rest (which probably also did some good for his back), he played in 14 more games, batting .393 (22-for-56) from August 17-31. he saw some extra time as the designated hitter this month until his throwing shoulder was ready to carry the left field load, but no matter what his role, Michael put up the best month of his 2015 campaign yet. he earned an August batting average of

Continue reading this blog post here »
Posted by 216clevelandgirl at 7:37 PM No comments: