Michael Brantley has done it again! during the game on September 22, just before the 11th hour, in the 11th inning, he hit his second walk-off of the season to help the Indians defeat the Boston Red Sox, 5-4!👏👏👏

let me first backtrack before i get into Michael's heroics. the Tribe had
a 4-2 lead going into the 8th inning. Andrew Miller gave up a leadoff single to Mitch Moreland, then got the next two batters out via a flyout to center and strikeout looking. at this time, manager Terry Francona made a pitching change, bringing in lefty Brad Hand to face Jackie Bradley, Jr., and Red Sox skipper Alex Cora then decided to pinch run Tzu-Wei Lin for Moreland. Bradley hit a double to left field off Hand, which advanced Lin to 3rd base. Andrew Benintendi was up next and he sent a line drive single to left that scored both runners and tied the game at 4. but Benintendi tried to stretch his single into a double and after Michael threw the ball in to Jose Ramirez, the 2nd baseman applied the tag on Benintendi to end the inning. (so Michael was awarded with an outfield assist!)

the game remained in a deadlock at 4 until the bottom of the 11th inning. right-handed pitcher Drew Pomeranz (former Tribehand) was summoned to pitch for the Red Sox. Yan Gomes began the frame with a ground ball single to 3rd and was then replaced by pinch runner Rajai Davis. Greg Allen followed with a ground ball single to left, allowing Davis to move up to 2nd base. Francisco Lindor was then going to sac bunt the runners over, but when Davis and Allen pulled off a double steal, that became unnecessary and in turn caused Pomeranz to intentionally walk Lindor to load the bases.

so Michael came to the plate with the bases loaded and nobody out. he first took a ball from Pomeranz before fouling the second pitch upstairs. then, on a 1-1 count, Michael hit a fly ball single to left field that scored Davis! and the Indians won the game, 5-4!


the walk-off RBI single was his second of the season (with his previous coming on August 9), crediting him with two of the Tribe's six walk-offs this year to lead the team! overall, Michael had a good night, going 3-for-6 with three singles and the go-ahead RBI!

it was great to see Michael return to his clutch ways because coming into this at bat, he had gone a mere 2-for-16 in 17 previous plate appearances with runners on base. moreover, he was only 10-for-45 in 51 PA with runners in scoring position since July 22. conversely, he had been very solid with the bases loaded this year, batting .545 (6-for-11) with 16 RBI for the season. so maybe that helped in this situation.

once the ball fell into the left field corner, all the usual chaos ensued. Lindor was the first to run out to Michael and jump on him. then Lindor excitedly and playfully punched his chest as other teammates slapped him on the head and threw water and ice on him. some guys attempted to rip his jersey off (but they didn't succeed this time). i think Josh Tomlin and Adam Plutko got him with water, Trevor Bauer splashed red Gatorade in his face, Erik Gonzalez dumped the drink tray of cups on him, and another player threw a cooler of ice water on him all in celebration before Michael could finally run away from the mob scene haha 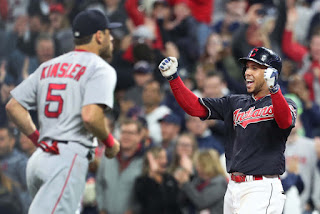 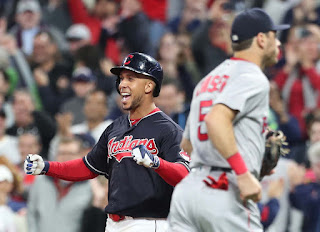 before doing his postgame interview on the field with Andre Knott, the in-game reporter for SportsTime Ohio, the last Indians' walk-off tradition commenced. Michael was prepared and he wrapped his arms around Knott as Gomes threw a Gatorade cooler filled with ice and water on Michael and Lindor got Dre with blue Gatorade. you can see that in a twitter video from Margot Maurer, who was at the game and had a great view of it!

at the start of the interview on mlb.com, Knott teased Michael because in the top of the 4th inning, he made a catch in left field near the railing for the second out of the inning and then instead of throwing the ball in to an infielder, he gave it to a fan, which apparently you're not really supposed to do. so Knott asked how many outs there were, and Michael played along, saying, "i have no idea. uh, the ball was scuffed. you didn't see the scuff on the ball? yeah, yeah, yeah, it was scuffed."

is it fun to get ready for October having these type of games this week? "yeah, it's great. uh, you know, the fans come out, they love it, we love it. uh, we're playing a great team in Boston, we know that and uh, we just look forward to going out there and competing every day and looking to get better, looking to go healthy into the postseason and, you know, have a good run."

Pomeranz, going through the inning that he went through, what's going through Michael's mind as he comes up with that at bat? "really just not try to do too much. you know, the whole goal is to get that runner in from 3rd any way i can and, you know, he has a good breaking ball, you know, a great fastball as well so i was just trying to get a pitch out over the plate and, you know, get it in the outfield somehow, some way."

as Knott wanted to wrap it up because it was cold, Michael agreed, "it's, it's very cold. that, that was a lot of water. they filled it up before they came out, too. that ain't right, that ain't right."

Knott closed with, "the ball was scuffed, boys" and Michael laughed heartily.

Michael had an opportunity to be part of a Tribe comeback the previous night on September 21 with the bases loaded (after an intent walk to Lindor) and the Indians down, 7-5, with 2 outs in the bottom of the 8th inning, but could not deliver, as he fouled out to left field. so when a similar scenario arose in this game, Michael was determined to come through.

"that's on my mind every time," Michael admitted in Paul Hoynes' cleveland.com postgame article. "i wasn't happy that i got out, but i had a chance to redeem myself today and we got a W because of it. "

"it never gets old," he continued in Chris Assenheimer's article on chroniclet.com. "i like winning, so to go out and get it done for your team, there's no better feeling."

click the links to read all the blogs i wrote about his walk-offs! congratulations, Michael, on adding yet another walk-off to your resume!❼👏💗😀


and on a personal note, i just want to say how fortunate i felt to be at this game and watch Michael get the game winning hit at the ballpark while i was in Cleveland for this past weekend. while it definitely delayed my blog, i am thankful that i got to see something that Michael Brantley will likely never do with the Cleveland Indians ever again (because i just don't believe he's going to return to the team in 2019😞). i am so happy for and proud of everything Michael has accomplished in his 10 years with the Tribe!😉💗

as the season winds down, i'm still gathering all the news i can find about Michael and will be live tweeting his ABs for this last week, so keep following me @clevelandgirl23 on twitter for that. and don't forget to check out my #CelebratingMichaelBrantley series as well! i have a couple good memories from Michael's career to share before the playoffs start, you won't want to miss them! but if you have missed anything, you can revisit all the best moments from Michael's time as an Indian by searching the hashtag and scrolling back through the thread. leave comments and tell me your favorite Michael memories, too!🎉

i have a lot of blogs coming out soon, so i recommend joining my subscription list to receive email notifications whenever new posts go live! just enter your email address in the box underneath the Blog Archive sidebar on the upper right-hand side of this page and you'll be all set!📧
Posted by 216clevelandgirl at 7:02 PM