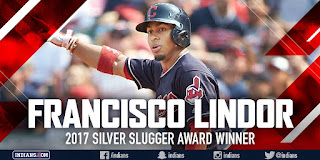 Louisville Slugger's Silver Slugger Award is Major
League Baseball's top offensive honor. four representatives from each major league team's coaching staff get to take part in the selection process. these managers and coaches vote for the players they feel are the best offensively at each fielding position in both leagues, as well as the DH in the AL and pitcher in the NL. the only stipulation is the voters cannot pick any players from their own team. a player's batting average, on-base percentage, and slugging percentage are heavily taken into consideration by those who vote, along with a player's overall offensive value to his ballclub.

when looking at Lindor's numbers, i think he was a pretty obvious winner at short. as for Ramirez, he spent time as both a 2nd baseman and 3rd baseman in 2017. evidently, the award does not factor in position splits; otherwise, he may not have won. now let's check out some of Frankie and Josey's rankings.

Lindor and Ramirez are the first pair of Indians to win this award since Michael Brantley and Yan Gomes both won it in 2014. prior to that duo, Roberto Alomar and Manny Ramirez won Silver Sluggers together back in 2000.

other Tribesmen who have won Silver Slugger Awards in the 21st century include Juan Gonzalez in 2001 and Victor Martinez in 2004.


don't forget to follow me on twitter @clevelandgirl23 all offseason for news about Brantley's recovery from right ankle surgery. and if you'd like to join my subscription list, you can enter your email address in the box underneath the Blog Archive sidebar over on the upper right side of the page.📧
Posted by 216clevelandgirl at 6:54 PM