Who's Writing This Stuff?!

that's probably the biggest question you have. who am i, and why should you waste your time reading anything i have to say? well, maybe i can answer that by telling you a little bit about myself, and then that will convince you to extend your stay on my blog ;D

i am a Ride or Die Cleveland Indians fan. i've liked the Tribe since 1996 and have been nothing but loyal to them in spite of my location. i don't live in Cleveland, nor do i live in Ohio. i'm from an area of NY where not only are Indians fans few, but Indians games are blacked out on the MLB package. so unless we're playing the Yankees or Mets, or the game is being broadcast nationally on a channel like FOX or ESPN or FS1, i can't actually watch the games. as a result, i rely heavily on GameDay audio. luckily for me though, the Indians have one of the best announcers in the business on WTAM 1100 in Tom Hamilton, and his calls are outstanding. he makes solely listening to games very enjoyable. and i'm so used to it that it doesn't bother me anymore. besides, all the big plays end up on the Indians.com video section anyways, so i never miss out on important stuff.

i refuse to give up on a game before the final out is recorded. i love baseball too much to turn off the game early and deprive myself of innings no matter how poorly the team might be playing. in fact, for the past 8 seasons, i have not missed so much as one out of one inning of one game. the last game i missed was August 29, 2010, when i went to my cousin's bridal shower. since then, i have managed to arrange my life (schedule, appointments, social life, etc.) around Indians baseball, an obsession that grew even more once Michael Brantley became an every day regular player lol but yeah, aside from the handful of games i went to and the few that were on TV here, i spent the majority of the last 8 years only listening to game audio on my computer. i think you'll be hard-pressed to find anyone else who would tolerate doing what i do every season for up to 162 games, plus the spring training schedule. but it's not a choice for me; i do it for my love of the Tribe.

seeing as how i don't have the luxury of watching STO, or Fox SportsTime Ohio as it is now called, i depend on the internet for all my Tribe information. and boy do i take advantage of all the info that is provided for me online. i read an obscene amount of articles and Tribe writer tweets on a daily basis to keep up with the news as it breaks. bottom line here, you can trust that i always know what's going on.


what makes me Brantley's #1 fan like i constantly claim? let me clarify this right off the bat. i know that Michael's family and lifelong friends have been supporting him since he was a little boy with the dream of breaking into the big leagues. i'm not crazy. but i do believe that i am Michael's #1 fan outside of his family and friends. i don't think that's arguable and here's why.

as i've been saying for years, i was here before the Brantley bandwagon. i supported him long before he became the All Star player that he is today. the Indians acquired him from the Milwaukee Brewers on October 3, 2008 as the last piece of the C.C. Sabathia trade, and this player to be named later was hyped up by several people in the Cleveland media. once Michael started racking up some good numbers in Columbus in 2009, i began to really pay attention. by the time he was called up to Cleveland on September 1, 2009, and made his Indians debut, i knew this guy was gonna be something special. i quickly pronounced him as my new favorite player, and i let everyone know it (to the point where people were tired of hearing me talk about him lol).

i think i can say with confidence that nobody dedicates as much time as i do to documenting all his #s and keeping track of what he does every game. this is a huge part of what makes me feel like i can call myself his #1. until someone else gets his autograph 13 times, documents his daily/monthly/yearly #s the way i do, bookmarks all the videos that get posted of him on Indians.com, takes screenshots of said videos, saves all the photos of him that appear in online articles, and can declare that they supported Michael during his rookie days back in 2010 when his batting average was as low as .118, you cannot argue with me about it. i also take countless pictures and videos of Michael for my personal records whenever i go to Cleveland for Tribe games. i always take video of all his plate appearances and have gotten a couple of his home runs recorded.

fact: through 2018, Michael has hit 87 home runs in the major leagues and i haven't missed one. i have been present for all 87, in real-time as they happened, either by listening to the game audio or seeing those homers on TV or in person.

need more evidence that i'm his #1 fan? i got you. i made what i believe was the first Brantley sign to appear at Progressive Field. actually, it read, "Michael Brantley's #1 fan." i brought it to the game on August 28, 2010, which lured him over to my section before the game and got me an autograph and a big smile from Michael himself. you can read all about that story here. 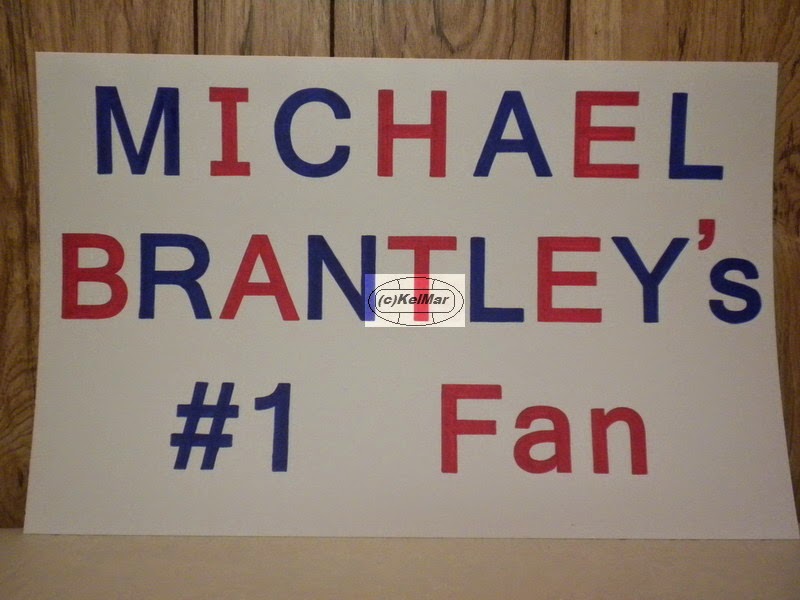 oh, but that's not all the Brantley merch i have. i went to the Indians game on July 27, 2013, when they gave away a Brantley replica jersey, and left the ballpark with not one but TWO jerseys in my possession. and, not surprisingly, i also bought his 2014 All Star jersey on the day it was announced that he made the team. when the Indians came out with their emoji t-shirt towards the end of 2015 with a Brantley face on it, i bought that, too. besides that, when Michael made the 2017 All Star team, i naturally got his All Star "shirsey" as it's called, as well as a Brantley All Star jersey in a women's size, which was not easy to find but i did. i picked up a Dr. Smooth t-shirt, representing his nickname from MLB Players Weekend, in 2017 as well. after Michael was selected to the 2018 All Star team, i got his All Star "shirsey" and a Brantley All Star jersey in a kids size (because they didn't have any in womens). and when he changed his MLB Players Weekend nickname to Junior, i purchased that jersey in a mens small (because they again didn't have any in womens and i disliked the nickname t-shirts).

additionally, i have numerous Brantley shirts that were designed by local Cleveland t-shirt establishments Fresh Brewed Tees and GV Art and Design, including a blue Dr. Smooth t-shirt (with his signature on it), a red Dr. Smooth bottle cap t-shirt (with his signature), a Boys of Summer t-shirt with Brantley on it (with his signature), a blue So Smooth It's Criminal t-shirt, and a red Brantley For President t-shirt. i also have a white Brantley 23 t-shirt and gray Michael Brantley sweatshirt from 500 Level. as for non-clothing items, i of course have the Brantley bobbleheads that the Indians gave away on September 1, 2014 and August 8, 2015. i also bought a Brantley bobble that was available for purchase in the Indians team shop. in addition, i'm proud to say that i own a Michael Brantley plush doll, which is the cutest thing if i do say so myself. i have a poster, numerous photos, and a plaque of Michael as well.

the plethora of blogs that i post here should prove my claim as well. i take notes during every game Michael plays in and tweet the details of all his plate appearances and defensive plays. then when each game is done, i copy his game stats neatly into my Brantley #s notebook, which later get typed up into a blog on here. i calculate all his monthly #s and averages myself. i don't simply pull his numbers off a statistics website like baseball-reference.com. i don't need to; i'm practically Brantley-reference.com lol


i don't do all this for recognition. i started doing it because i believe Michael is an amazing athlete and i wanted to do whatever i could to help get him recognized by people who maybe wouldn't otherwise have taken notice of him. now in 2018, that's not really a problem anymore. but i'm still trying to get my blog out there for Michael, not to make a name for myself. fans can look at it like a Brantley baseball journal, showing his growth and development. and maybe one day in the far-off future when Michael is retired from baseball, he can look back at it and fondly remember all the amazing things he did with the Tribe. it does take up a lot of my time but i'm happy to do it. writing his game line down in my notebook every night and seeing what his current batting average and other baseball stats are is something i look forward to doing. and it was especially fun in 2014, a career season for Michael in every important category. i can't wait to see what he's gonna do next, and i will be here to document it all for as long as i can. no matter what, i will always be cheering him on and supporting him unconditionally, because that is what a #1 fan does.

thank you for taking the time to read through my blogs, i really appreciate your support of my supporting Michael. go ahead and share my blog links if you're so inclined and like what you're reading. and follow me on twitter @clevelandgirl23 for all the news about Dr. Smooth in one convenient place!

if you have any more questions about me that i didn't answer here, leave a comment or read my Contact Info page for additional ways to contact me.