Brantley Wins the Indians' 2017 Home Opener with a Walk-off Double!

welcome back, Dr. Smooth! during the Cleveland Indians' Home Opener versus the Chicago White Sox on April 11, 2017, Michael Brantley reminded everybody just how vital a piece the Tribe was missing in 2016 when he won today's game at Progressive Field in walk-off fashion.


let me set the scene. the Indians took an early lead in the bottom of the 1st inning after Francisco Lindor hit a solo home run off James Shields. later, the White Sox evened the score in the top of the 5th inning on Todd Frazier's home run off Carlos Carrasco. from there, the game remained tied at 1 through 9, forcing the Tribe's first extra innings of the season.

Indians lefty reliever Boone Logan started off the top of the 10th inning by
getting one out before he was replaced with Bryan Shaw, who got the last two outs. that gave the Tribe another opportunity for a walk-off in the bottom of the 10th.

Abraham Almonte led it off and struck out on a foul tip against right-handed White Sox pitcher Tommy Kahnle for out #1. then Carlos Santana struck out swinging for out #2. Lindor, on the other hand, kept the inning going when he drew a walk.

and so Michael's turn at the plate came with 2 outs and Lindor at 1st base. the first offering from Kahnle was a ball. then Kahnle attempted to pick off Lindor at 1st. Michael fouled the next pitch, a cutter, before taking two more balls. however, Kahnle apparently had a problem with those two pitches being called balls, as did Chicago's manager Rick Renteria, who had a few words for Will Little, the home plate umpire. once that all concluded, Michael fouled off a fastball to run the count full.

when Kahnle threw his 6th pitch in the AB, Michael smacked the 98 mph, two-seam fastball down the left field line and into the corner. Lindor flew around 3rd and ran home to score, and the Indians won the game, 2-1, on Michael's walk-off double! that not only marked his first extra base hit of the season, but also his first walk-off hit of the year, and the Indians' first walk-off win of the year! in addition, it was Michael's second go-ahead hit and go-ahead RBI of the season and his second straight of both kinds since his previous game on April 8. 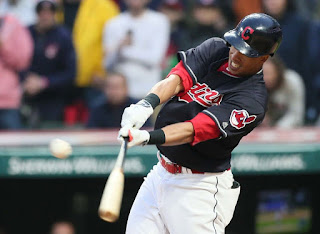 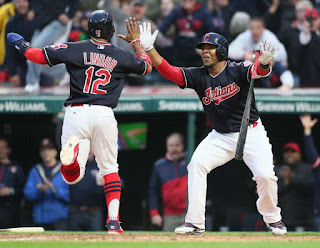 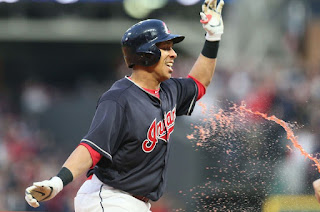 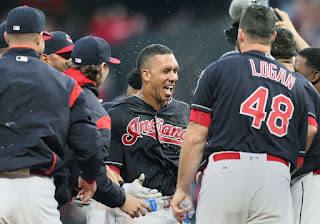 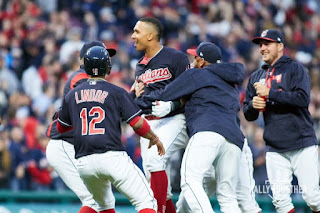 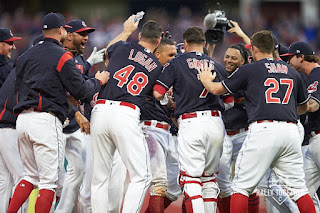 the Indians twitter account conveniently provided Tom Hamilton's WTAM 1100 radio call of Michael's walk-off for all those fans who love Hammy. his audio is gold.

according to Paul Hoynes' cleveland.com article, this win was just the second Home Opener win for the Tribe in the last nine years. wow. it was also only the fourth walk-off win in a Home Opener in the history of Progressive Field.

after the game, Michael spoke to Andre Knott, in-game reporter for SportsTime Ohio, on the field in between getting doused by Lindor. the full video can be found on the FOX Sports Ohio youtube channel.

what's going through Michael's mind in an at bat like that against a guy throwing 100 mph? "just trying to get my foot down, put a good swing on it, try to see the ball early."


what does it mean to be a part of this right now [after not being able to be part of so many celebrations last year]? "a lot. thanks to all the fans, my family for all their support to just get me back to this. there's times this offseason i never thought i'd be back but, with the great support that i got from my wife and my kids... and my kids are in the stands, got to watch daddy play again and i spent a lot of time away from them this offseason rehabbing but, back on the field i am and got to do it in front of a sold-out home opener, i don't know if it gets any better."

the song playing when Michael came to bat was "Welcome Back" (by Mase). does that mean anything, like he's telling everybody he's back and happy to be back? "i'm just happy and thankful and blessed to be back. it's been a long road, like i said before. we're home with a win, your home opener, smile on my face, it's a great day."

Michael did an interview with Greg Amsinger, Bill Ripken, and Pedro Martinez of MLB Network for MLB Tonight as well. the following is some of what he had to say, via MLB Network's twitter video.

"it was awesome [to be the hero in this first home game at Progressive Field since Game 7 of the World Series]. it was a all-around team effort, though. we were out there battling, it was getting cold. we were just one run better than the White Sox today, that's all you need."

"it feels great [to be back out on the field with his squad]. i gotta thank my wife, my kids, and all the family i had supporting me through this offseason. it was a long offseason, i spent a lot of time away from my kids rehabbing here in Cleveland. but to get back to this moment, to be with my teammates, it was all worth it."

in his at bat, was it his idea to jump at the 3-1 pitch, to set him up to get something better to hit? "i don't know if i was setting up, like you said, he throws 100. it was just a 3-1 pitch, i was trying to get a fastball, i was trying to be aggressive, i swung a little bit out of the zone. but it also kinda had to do with timing. i knew i had to start a little bit earlier and i was able to just get another fastball away and just kinda stay on it and put a good swing on it.

"i was running myself, obviously, but i was kinda watching [Lindor]. as soon as he hit 3rd, i knew that Melky [Cabrera] didn't have the ball yet and i knew he was gonna score so i knew the game was over so i was excited. i kinda premature celebrated a little bit."

furthermore, Michael sat in front of the media after the game in the presser room. from a video on cleveland.com's youtube channel, he shared, "it's great. it's great to be back to be a part of this team. team-win all the way around. pitched well, played defense well. we scored just one more than they did tonight so it was a good all-around team win.

"i'm just excited. you don't really feel your body, just jumping around, i guess waiting to get wet, you know it's coming. just excited that we won the home opener in front of own fans that all came out. it was getting cold, our fans hung in there for us and we were able to get a win in front of them."

"we got a win, that's all that matters. a lot of hard work goes into this offseason, a lot of time away from my kids and family, but they're my support. they kept me going and motivated and i just thank my family so much for always being there for me."

"[usually they rip] your jersey, tear you up. it was nice, i just got a little bit wet. i'll take that one, that was good."

thank god Michael's teammates went easy on him during the celebration, as Ryan Lewis' tweet corroborated.

in Jordan Bastian's blog on bastian.mlblogs.com, Lindor joked, "i love him. i wanted to punch him, but he had taught me so many things that i didn't want to punch him."

additionally, Michael explained that he was "just trying to stay within myself" when Renteria interrupted his at bat to talk with his pitcher and the ump. "i knew i had an advantage in the hitting count and i was trying not to do too much. i just put a good swing on the baseball.

"i don't know if you can write it up any better."

Carrasco briefly discussed Michael's triumph with the media, too. also from the cleveland.com youtube video, Cookie remarked, "to see Michael Brantley coming back, he had a tough year last year... today he got the hit, the winning run, so i'm really happy for him."

via Lewis' twitter pic, Lindor declared, "it was awesome. i was so happy for him. as soon as i touched home plate, i looked around and everyone was clapping for him, his family in the stands, it was pretty cool, special, happy for him. he's back. Brantley's back."

aside from Michael himself, this is most thrilling for me because i followed every single step of his rehabilitation process, beginning with his first surgery for a torn right labrum on November 9, 2015, and i never once didn't believe that he would not only come back from his shoulder woes, but also return to the player he had become in 2014 and 2015. so congratulations, Michael! that was a heck of a performance in your first game at home since May 8, 2016! i am so happy for and proud of you!💗

and this was only his 6th game of this very young 2017 campaign. what will Dr. Smooth do next? i can't wait to find out!

for all your Brantley information this season, follow me on twitter @clevelandgirl23. and if you want, you can subscribe to my email list, under the Blog Archive sidebar over on the right side of this page, to receive notifications whenever i post a new blog, like this [unplanned, but awesome] one!
Posted by 216clevelandgirl at 10:40 PM