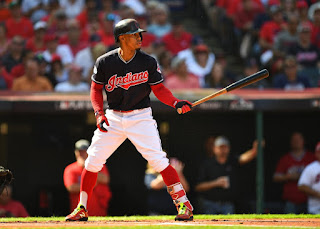 Louisville Slugger's Silver Slugger Award is the top offensive honor in Major League Baseball. the selection process works like this: every organization has four representatives from its coaching staff who get to vote on the year's Sluggers. at the end of the regular season, those managers and designated coaches then pick the players they believe are the best offensively at each fielding position in both leagues, along with the DH in the American League and pitcher in the National League. statistical criteria, particularly batting average, on-base percentage, and slugging percentage, as well as a player's overall offensive value to his team factor heavily into the decision. note: voters cannot choose any players from their own ballclub.

while Lindor played exclusively at short this year, Ramirez spent time at 3rd and 2nd base before permanently moving to 2nd in September once newly acquired Josh Donaldson was ready to get on the field with the Tribe. now let's see some of Lindor and Ramirez's rankings in 2018.

Lindor and Ramirez are now back-to-back Silver Slugger winners, having initially taken the award home in 2017. the last pair of Indians to collect Silver Sluggers in consecutive seasons were Roberto Alomar and Manny Ramirez in 1999 and 2000, according to Joe Noga's cleveland.com article.

prior to Lindor and Ramirez, the previous Indians/duo to win this award were Michael Brantley and Yan Gomes--Silver Slugger winners in 2014. the outfielder and catcher, respectively, then became the first twosome to obtain the accolade since Alomar and Ramirez in 2000.


every winner receives a $50,000 bonus. (and apparently Martinez gets $100K for his double win. is it really fair that he's considered an OF and a DH, though? don't get me started.) congrats again, Frankie & Josey!💰

do you agree with this year's Slugger selections or do you think someone got robbed? comment below!


btw, the Indians sent out an email on October 12 saying Brantley was on the Silver Slugger watch list, yet he wasn't even one of the six OF finalists. seeing as how he finished 2018 with just 17 home runs and 76 RBI, i didn't really think Michael had much of a chance to emerge victorious here. so that was weird.🤷 on the other hand, Gomes was one of three finalists for his Silver Slugger catcher category.

let me leave you with a reminder to keep following me on twitter @clevelandgirl23 for all the Brantley rumors and news about where he's going to sign his next contract. you can also get email notifications when i post new blogs if you join my subscription list by entering your email address in the box underneath the Blog Archive sidebar on the right side of this page.📧
Posted by 216clevelandgirl at 7:09 PM