there was one really big benchmark that Michael Brantley hadn't yet achieved in his Major League career. i've been waiting for it patiently and tonight, on May 1, 2018, during his 10th big league season, it happened--Michael finally hit his first career grand slam!😁


let me set the scene. the Indians were playing the Texas Rangers at Progressive Field. Michael came to bat in the bottom of the 9th inning with 2 outs and the Tribe down, 6-2. he stepped into the batter's box to face right-handed closer Keone Kela with the bases loaded--Bradley Zimmer at 3rd, Francisco Lindor at 2nd, and Jason Kipnis at 1st. after an 0-2 count, Michael
sent a high fly ball to deep right field for a game-tying grand slam! the pitch sequence went: called strike, swinging strike, granny. 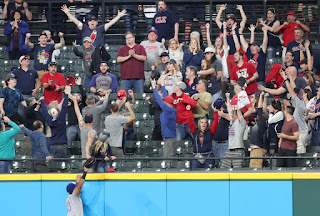 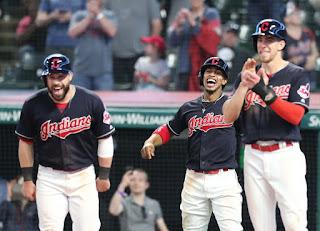 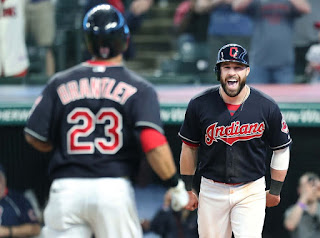 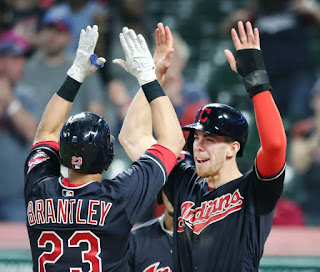 you can (and most definitely should) listen to WTAM 1100 radio broadcaster Tom Hamilton's call of the grand slam in the video on mlb.com/indians here.

also according to Hammy, this was the first time an Indians player hit a game-tying grand slam in the 9th inning since Toby Harrah did it in 1980! and it was just the second granny by a Tribesman this year, as Yonder Alonso hit one on March 31 against the Seattle Mariners.


Jordan Bastian provided even more historical context in his article on mlb.com/indians. first off, Harrah's grand slam occurred on July 20, 1980, in Oakland. secondly, no Indians player had hit a game-tying slam in any inning since Tony Bernazard's fifth inning slam against the California Angels on June 10, 1987. in addition, the last Major League player to boast a game-tying granny with 2 outs in the ninth inning or extra innings prior to Michael was Kyle Seager, who hit his for the Mariners on June 5, 2013 (in the 14th inning, so tweeted Andrew Simon).

after the game, Michael discussed his grand slam. in Bastian and Andrew Mearns' article on mlb.com/cut4, he recounted, "it was great. it was awesome to do it at home, in front of your home fans, so you get the cheers and not the boos. it came at a good time, where it got us back in the ballgame and gave us a chance to win the ballgame. i think that was most important."

what was he thinking once the count got to 0-2? did he change his approach? "the same thing i'm thinking anytime. get a good strike to hit. i don't change my approach with two strikes. i'm still trying to see the ball up and trying to get a good pitch to hit. nothing changes with me."

before Michael's at bat, the Rangers had a 95% win probability, per the Cut4 article, via fangraphs.com. his grand slam increased the Tribe's chances to win by 53.9%.


Indians starter Mike Clevinger was in the clubhouse at the time of the slam. "sitting at my locker," Clev revealed in Bastian's postgame article for mlb.com/indians. "Kela was throwing some electric stuff. as soon as he hit it, we could hear [the fans] erupt right before we erupted inside. we were like, 'oh my god, what happened?' and then we saw it happen [on the clubhouse TV]. and then it was just amazing. a good moment."

(and i am SO happy he hit his first grand slam while still a member of the Cleveland Indians, you have no idea!😂)

sadly, Michael's spectacular accomplishment was spoiled because the Indians ended up losing the contest, 8-6, in 12 innings. from Bastian's article on mlb.com/indians, Michael stated, "unfortunately, we weren't able to get the win. but we'll keep battling. never-die attitude. my teammates did a great job of even giving me that opportunity in the ninth inning right there. it was a hard-fought loss."

did you think Michael was going to hit a grand slam when he came up to bat with the bases loaded and/or once he got behind in the count, 0-2? and did you think the Indians were going to pull off a comeback win once he did hit the granny? tell me your thoughts in a comment below!💭

ICYMI: Michael's been off to a terrific start this year, despite opening the season on the disabled list and getting extra days off to rest in April. you can read all about his first month in my Brantley's March/April 2018 #s blog.


since this is his final season with the Tribe, i've initiated #CelebratingMichaelBrantley. every Monday, i tweet one of the many highlights from Michael's career as an Indian. so make sure you're following me on twitter @clevelandgirl23 to relive all the best performances from his past. feel free to search the hashtag and scroll through the thread to see what you might have missed thus far, and if you want to share some of your own favorite memories, please do!🎉

let me also remind you that i have a subscription list. to join, simply enter your email address in the box underneath the Blog Archive sidebar over on the upper right side of this page. then you'll receive notifications in your inbox every time i post a new blog.📧

have you voted in my new May polls yet? those are under the About Me sidebar on the right side of the page as well. what will Michael's May batting average be, how many HR and RBI will he total for the month, and how many games will the Tribe win in May? vote now!✓
Posted by 216clevelandgirl at 10:15 PM