why the vitriol towards this former Indians player you ask? cause he did my boy dirty, and i don't like it. for the first time in Michael's career, he has a mild concussion. and i am pissed.

how did this happen? well i'll tell you. with 1 out in the bottom of the 3rd inning in a game against the LA Angels on June 16, Michael hit a go-ahead RBI single and was at 1st base. then when the next batter, Jason Kipnis, hit into an inning-ending double play, Michael tried to break it up when sliding into 2nd base. unfortunately for Michael, the Angels shortstop at 2nd base, John McDonald, didn't even try to avoid the collision and just kneed Michael in the fuckin head like it was nothing as he turned the double play.


that's a dick move and it's not the first time McDonald's done this. he did the same thing before to 1st baseman Justin Morneau on July 7, 2010, and Morneau's concussion was so bad that he did not return that season. the concussion also negatively impacted his playing ability for some time after that year as well. most guys who turn a dp know enough to at least try and avoid contact when a runner tries to interfere with his path. old man McDonald, who isn't even a good player and should probably just retire anyways, needs to take a Baseball 101 course again or something.

so after Michael got bonked, he just kinda sat on the infield for a bit.


then when he got up, he didn't look right.


i was "lucky" enough to have a live look-in on my computer for his RBI single and then Kip's inning-ending dp. so i saw how Michael was looking into the dugout, almost as if to say, 'did you see that? should i keep playing? should you take me out of the game?' i think if Michael had gone back into the dugout once the 3rd inning ended, he never would have gone to left field and played the top of the 4th inning. but since he was already on the field when the inning ended, his hat and glove were brought to him, as is common practice, and he trotted back out to left field. Michael even managed to record the 2nd putout of the inning. but something didn't look right about his catch. he was looking into the dugout and rubbing his eye or his head afterwards. 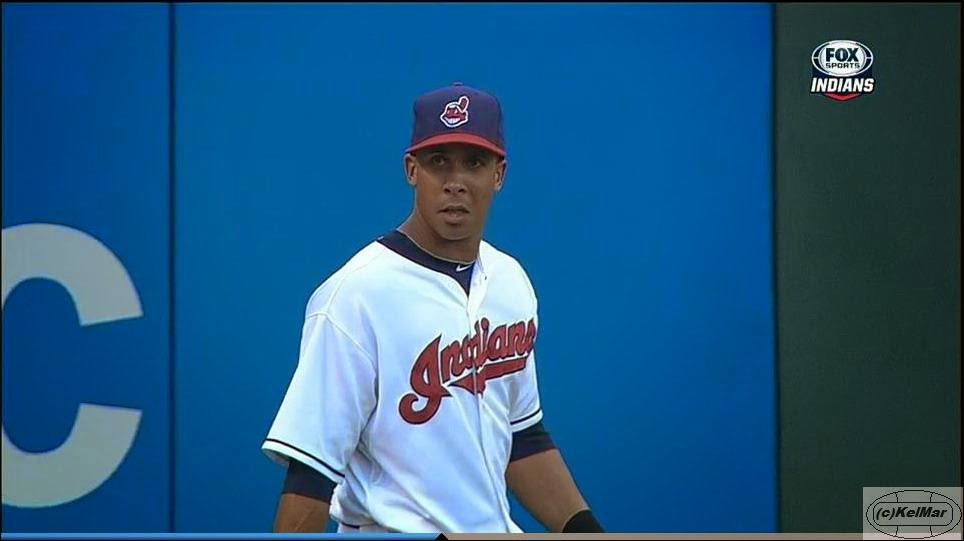 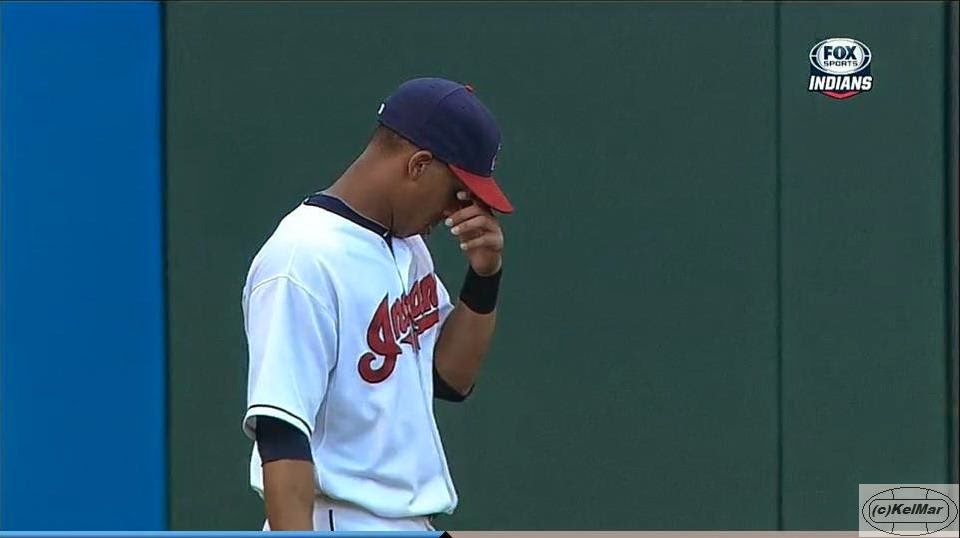 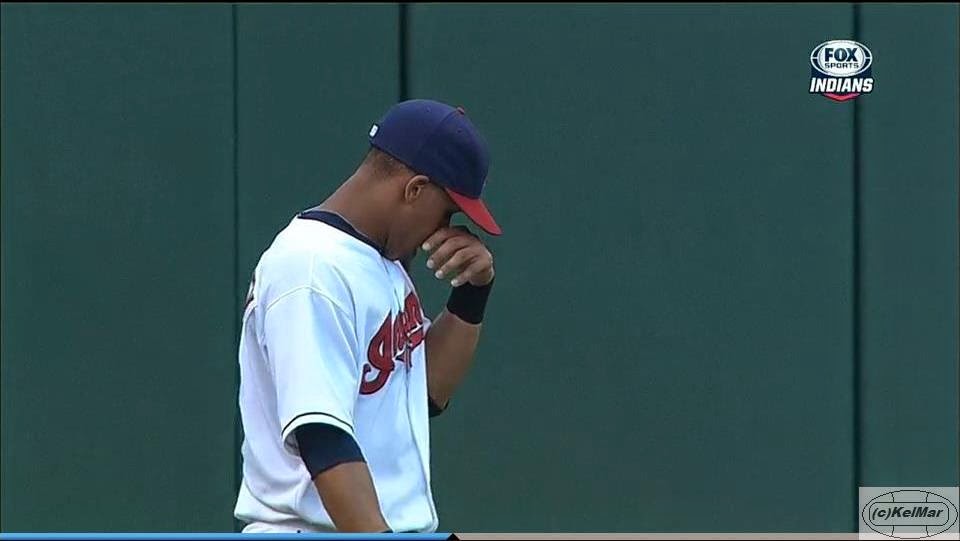 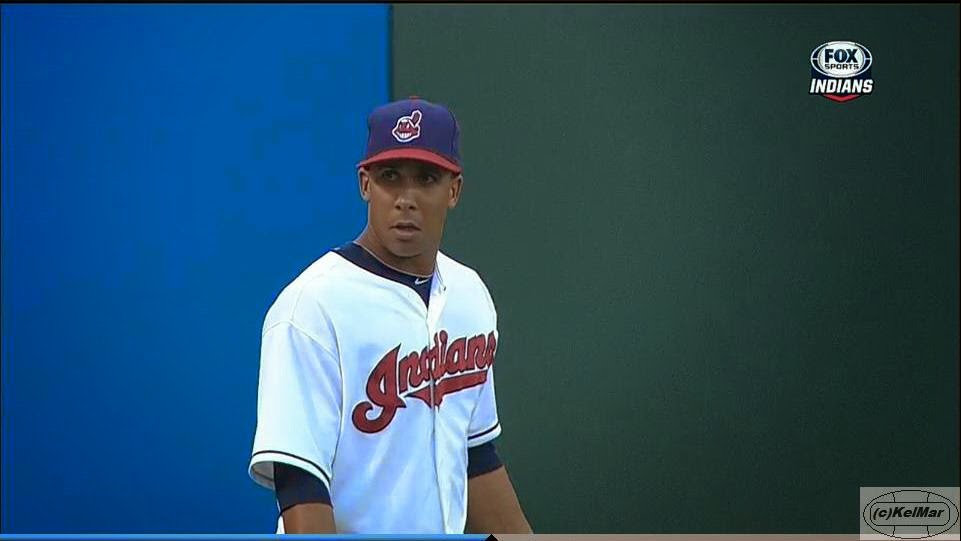 he probably should not have been out there in the first place and he was removed from the game before the top of the 5th started.

later on in the game it was revealed that Michael left the game with head/neck soreness. my immediate fear was concussion. after the game they said Michael passed all the initial concussion tests, but it didn't make me feel better because i knew he very well could show up to the ballpark the following day with a concussion.

on June 17, the starting lineup was released online with Michael batting 3rd. a short time later, a new lineup was released without Michael's name. it was then that i learned that while Michael was performing his pregame baseball routine, he started feeling pressure in his head and had a stiff neck, though he claimed he was feeling fine prior to this. the Indians then sent him off to Cleveland Clinic for further testing.

we did not get another Michael update until June 18, when it was finally confirmed that he did have a mild concussion. "i just didn't feel perfect (Tuesday)," Brantley said. "it's a day-by-day process. i don't want to put a deadline on anything, but my goal is to get back out there with my team as fast as possible. that involves listening to the medical staff and making sure i'm ready to go 100 percent. i'm making progress each and every day. it's all positive."

because of the progress he's making and the fact that he already played catch and hit off the tee today, they opted not to put him on the special concussion DL. Francona said, "the way it was explained to me, it's the type of concussion that should go away faster. and i think we're actually seeing that. Brantley already looks more clear-eyed. i think he's doing very well. every activity that's been given to him (Wednesday), he's handled without any occurrences of anything. there's a progression in place."

they're hoping Michael will be okay to play again on Saturday, June 21. (coincidentally, that is the next Tribe game i'm going to. so i REALLY hope he's back then.) if this happens, he would only miss a total of 3 games, which isn't that bad. but it still doesn't make me forgive McDonald.

let me tell you how angry i was with McDonald the night this all went down. i threw things, i swore (way more than i've written here lol), i tried not to cry. then i thought shit, could this have been a set up? we have no idea what goes on in players' heads and we've all seen how some athletes will play dirty to get ahead. maybe it was planned on the part of the Angels. like, the players came together in a meeting and said 'if anyone gets a chance to take out Brantley, go for it,' as a way to ensure Mike Trout wouldn't lose his starting spot on the All Star team or something. who the fuck knows. okay maybe i was reaching there but i was fuckin furious and i needed to place blame somewhere. McDonald called the "accident" unfortunate, but did he even apologize? cause i never heard anything about that. he did ask Michael if he was okay afterwards, because that's what he "tends to do," then didn't give it a second thought. but that doesn't exactly make him or the situation look better imo.

if Michael had done this purely on his own, like banged his head against the left field wall while making a catch, i'd be less upset. but the fact that it was done to him and that it was avoidable, has me fired up. Michael was killing it on the field prior to all this. the hits just kept on coming for him and his batting average kept going up every game he played. Michael had a .323 BA with 11 home runs and 46 RBI before the incident. he also had a 5 multi-hit games streak going, which McDonald abruptly ended. additionally, he had an 8-game hitting streak and a 15-game reached-base streak. if when Michael comes back on June 21 his streaks come to an end, i am gonna be fuckin infuriated.

Michael has not been on the DL since he broke his hamate bone in late July 2011. so he's gone quite a while without needing to be put on the DL for anything, which is good because it shows he's not injury prone. missing games due to a concussion, however, is still worrisome to me because i'm not sure how that will affect him. he could lose his timing and the roll he's been on. this could ultimately fuck up his entire season. as i said, he was literally on the up and up, on his way to challenging for the AL batting title, and now i fear when he comes back he'll be on a downward trend. it would have been nice to see how long Michael's multi-hits streak could have continued, but now we'll never know.

another cruel twist of fate? when Michael is scheduled to come back, he'll have 2 games under his belt before...wait for it...more goddamn interleague play. why?! ugh. that's the last thing Michael needed, to sit out a while and then have to come back and play interleague games, the one area where he's struggled this year. IL games have messed up his numbers every month this season. in April, before the IL games, he had a respectable BA. then after that dreaded San Fran series, his BA became unacceptable. and who can forget how at the end of May, Michael's overall hitting streak and franchise home game hitting streak both ended during IL play. so this is just fuckin typical that he's gotta come back and try to find his momentum again during another IL series. grrr.

i'm also concerned that Francona will put Michael back to his original 5th spot in the batting order when he comes back. i liked Michael batting 3rd when Kip was out, and was happily surprised when Francona let Michael stay there even when Kip came back from his DL stint. but now, i figure Francona will just let Kip have that spot again and Michael will go back to 5. goodbye regularity, it was fun while it lasted.

don't get me wrong, i am very grateful that nothing more serious occurred (even though a concussion is kind of serious), and that no bones were broken and he doesn't need surgery or a DL stint or anything like that. but it still agitates me that this whole thing could have been a non-issue if McDonald would have just moved out the damn way. my advice to Michael, next time someone hits into a double play, just let it happen. don't risk injury to yourself just cause the player behind you is a shit situational hitter. i don't ever wanna see this happen again.
Posted by 216clevelandgirl at 4:50 PM